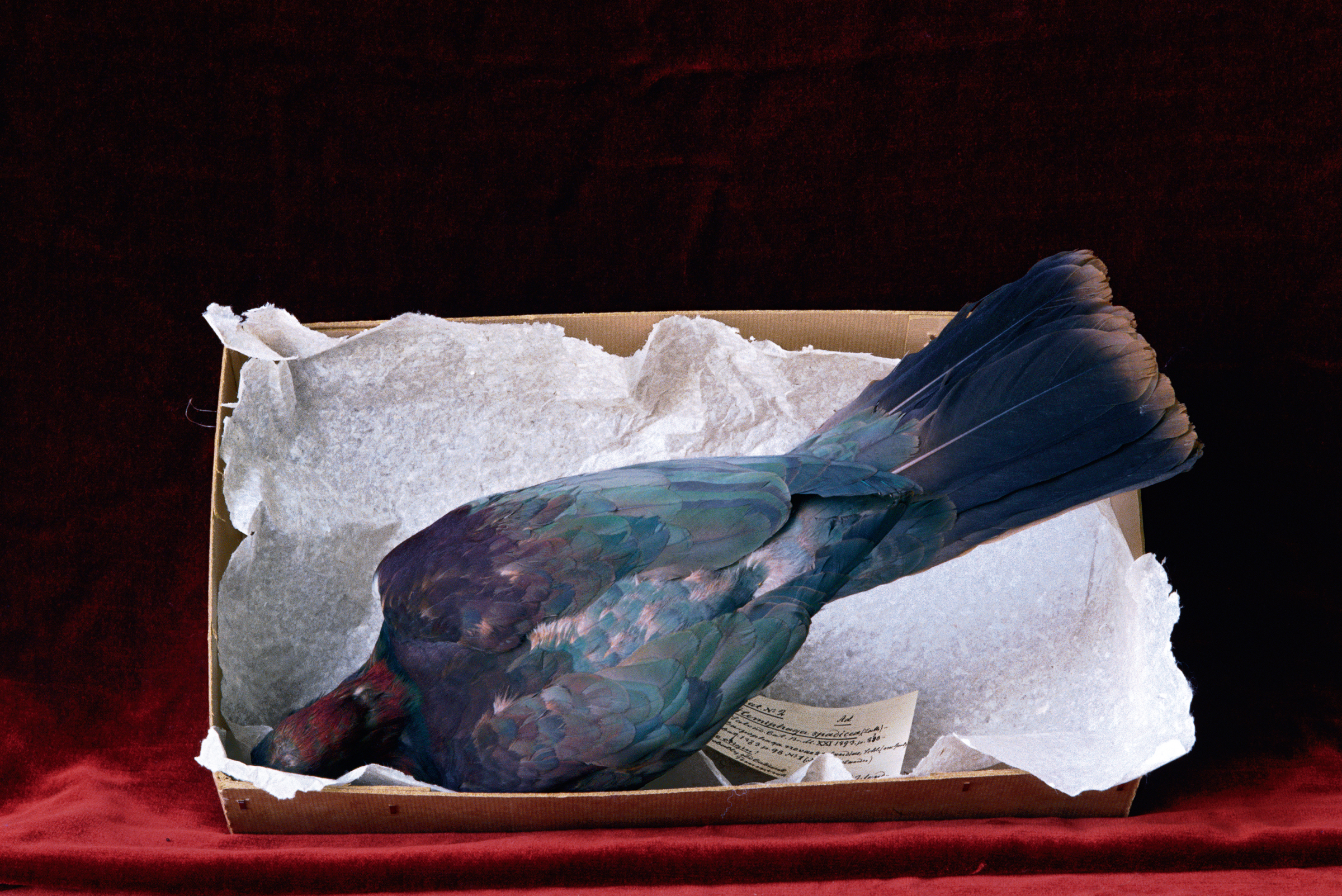 The gorgeous new edition of my Poetics of Natural History, just published by Rutgers University Press, includes photographs by Rosamond Purcell, one of the leading photographers of our time. I have admired Purcell for a long time, and I couldn't be prouder to have my work accompany hers. The connections between Purcell and the naturalists discussed in my book are obvious, as are the differences. In a decades-long career, which includes three collaborative projects with Stephen Jay Gould (Illuminations: A Bestiary, 1986; Finders, Keepers, 1993; Crossing Over, 2000), Purcell has become widely known for her unsettling still-lifes of human-made and natural objects and she has shown considerable interest in natural history museums, which both fascinate and appall her. Purcell's nature is to be found indoors—today the only space where Carolina Parakeets or Passenger Pigeons, their disemboweled, arsenic-dusted bodies arranged. in parallel lines, in drawers or stuffed, helter-skelter, into boxes, can still be found. Purcell's photographs frequently show the aftermath of massacres: her birds, instead of flying high, are lying low, resting on beds made by the dead wings of other members of their species. As Herman Melville once said, in a different context, "What like a bullet can undeceive" ("Shiloh: A Requiem").

Museums are, Purcell wrote in an incisive essay included in her book Swift As a Shadow (1991), "a way of closing out the cosmos from which each creature came." As ecosystems collapse, museums begin to replace the cosmos, that "inextricable network of organisms" that Alexander von Humboldt had once tried to capture. And they do so at a price. In the natural history museum, explains Purcell, an essential part of the animal's or plant's history is lost: "there is not enough room on the card or in the catalogue to report how the philosopher, the villager, the forest dweller or the poet saw the animal walk, crawl, zigzag, or soar." The museum, one might add, cannot preserve either the memory of how the dead animal saw us walk, how it saw us walk towards it, how in the final moments of that animal's life, fear would have taken over all other impulses, the paralyzing knowledge that all it was used to doing, what it enjoyed doing, was about to end. In death, the animal becomes a specimen, our specimen. If the museum tells us little about the animal itself, it tells us all about what we did to it after its death in order to confirm its deadness. Turned into a natural history specimen, the animal absorbs into its dead body the marks of our preservation attempts, "the straw, metal, and cotton poking through the skin," the hooks, bolts, and wires needed to fix it into place or to make it fit into a drawer or box.

Survival in the natural history collection is, obviously, different from survival in the wild.  It depends on the amount of data gathered about a specimen: the field notes, the record of the date of its capture, a reference to the place of its origin. History, in the natural history museum, is less history of nature or even history of a specific animal but the history of our interactions with it, which is, precisely, the topic of my book.

Consider Purcell's photograph of a Norfolk Island Pigeon (Hemiphaga novaeseelandiae spadicea), which serves as the frontispiece for the section on "representing" in my book, a triad of chapters dealing with stories surrounding the power of snakes in American natural history, with Audubon's Birds of America, and, finally, with Louis Agassiz's Amazon Valley expedition. The Norfolk Island Pigeon, known also as the Norfolk kereru (an onomatopoetic Maori word), was a subspecies of the New Zealand pigeon, a large, handsome, fruit-eating bird indigenous to a tiny island in the Pacific Ocean about 800 miles west of the coast of the Australian mainland, the site of one of England's worst penal colonies. Norfolk Island is so remote that, by 1814, the European settlers had left again, but not before exterminating the Norfolk pigeon, which, unlike them, had had no problem living there. The last Norfolk kereru was seen in 1801. (The Europeans, though they had vowed never to return, were back by 1825).

Purcell's kereru is shown lying beak down in a box, as if it had just fallen out of the sky, wings folded, the tail sticking up awkwardly, the head buried deep in the corner of the box, where it casts a shadow around it. But the white wrapping paper, the cardboard box, the cloth-covered table on which it sits, the label attached to what we assume is the bird's foot, remind us that this is not a natural but a museum setting. Purcell's is a composed image, for sure. The red on the bird's neck, the specks of pink on its plumage echo the red cloth; the brownish tips of the tail feathers provide a transition between the lighter brown of the box and the dark brown background. The image as a whole has a kind of sunset-like feel. Red suggests royalty (the kereru as a fallen king?) but also bloodshed. This is a bird defeated and subdued, yet not: we cannot see the bird's face or eyes. Protected from our intrusive looking, the kereru shares with us only what we own anyway—its carcass, now labeled for easy identification. The gently billowing wrapping paper, the label that seems to arch up as if lifted by an invisible wind indicate movement, even animation: a parody of the life that has long left that bird's beautiful body. Surrounded by the darkness to which it already belongs, the kereru is displayed here not as if it were alive, but as if it were a gift being unwrapped only for the benefit of the human viewer.

In Purcell's photograph, the technology that preserves the specimen (represented by the label) is complemented by another technological intervention: the camera. Purcell is aware of that irony. In fact, her image doubles up on the unreality of the natural history specimen. Purcell's unboxed Norfolk Island kereru is deader than dead, a puppet in a spectral theater, something that, if it ever was a bird, was that a very long time ago.

Purcell's memento mori is as powerful as it is ironic, because it's almost entirely useless: all the Norfolk kererus in the world perished a long time ago. But this near-uselessness is precisely the space in which art begins, where, in our case, it begins to question the premise on which the entire tradition of natural history rests, namely the assumption that we may look—in the words of Williams James, cited in the final chapter of my book—"on the vast diversity of living things as if [we] were there with authority to take mental possession of them all."