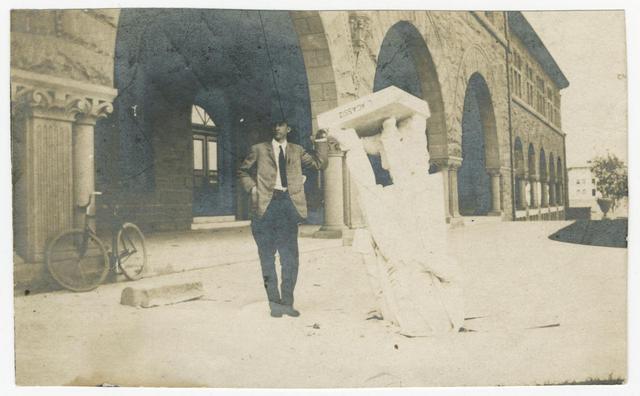 Earlier this week, the president of Stanford University, Marc Tessier-Lavigne, and Stanford's Board of Trustees approved a campus committee's recommendation to remove the name of the university's first president, David Starr Jordan (1851-1931), from Jordan Hall, home of Stanford's Department of Psychology. In addition, the marble statue of Jordan's mentor, Louis Agassiz (1807-1873), affixed to the exterior of Jordan Hall, will be relocated. Agassiz and Jordan had it coming: at Stanford as well as elsewhere, the shadow of their long-discredited ideas--polygenism, racial segregation, and, in Jordan's case, eugenics—had become too long to ignore. The last nail in the coffin of Jordan's legacy was the publication earlier this year of Lulu Miller's brilliant Why Fish Don't Exist, a reckoning with Jordan's relentlessly optimistic way of doing science filtered through the unforgiving mirror of Miller's own life experiences. Indiana University Bloomington, where Jordan had served as professor of natural history and as president before Leland and Jane Stanford recruited him in 1891 as their founding president, has just announced that it will rename Jordan Hall and likely other campus landmarks, too, such as the iconic creek that winds its way through the campus.

Of the two fallen scientists, Agassiz is receiving the lighter punishment—relocation, not removal. As Agassiz's last biographer (and as someone who had advocated for renaming Jordan Hall on the campus of my university) I was struck by the reasons the Stanford administrators gave for holding on to the statue, if in a different place: not Agassiz's undisputed scientific achievements in glaciology, ichthyology, or embryology, but the simple fact that he—or, rather, his marble effigy—had been removed once before, though not by administrators. A  Stanford University news release explained the decision by pointing to "the iconic imagery showing the statue's head stuck in concrete after being dislodged in the 1906 earthquake." The marble Agassiz had, the writer went on, thus become "an educational example demonstrating important principles in rock rheology (the study of the strength of Earth materials)."

To skeptical minds, this explanation might sound just a little bogus. Surely there are other, better examples one could find to aid in rheological demonstration? Or is Stanford planning to thrust the statue back into the concrete again, so that it might serve as a more authentic teaching tool?

The irony is that Stanford's reasoning would have made sense to Agassiz himself. When he died in his house on Eliot Street in Cambridge on December 14, 1873, Agassiz was one of the most famous scientists in the world. His stubborn resistance to Darwinism had rendered much of his work obsolete even before his death, but his institutional influence lasted. Just a few months before his death, he had convened the first American summer school of natural history on Penikese Island, off the coast of Massachusetts. He had also invited a dozen or so women to attend, something unheard of in a scientific culture that still defined itself as exclusively male. The Penikese school was an extraordinary event in the history of American science, and to many of his contemporaries, even those who had long sided with Darwin, it was inconceivable that Agassiz had died so soon after the culmination of his efforts to popularize science. While Agassiz's seaside classroom on Penikese Island did not survive for more than a year after his death, several of his former students went on to create similar opportunities, among them the two oldest such institutions on the East and West Coast of the United States, the Marine Biological Laboratory in Woods Hole, Massachusetts, in 1888, and the Hopkins Marine Station of Stanford University in Pacific Grove, California, in 1892. (For more on this topic, see my Louis Agassiz: Creator of American Science and my introduction to Louis Agassiz's Introduction to the Study of Natural History.)

Then, on April 21, 1906, the devastating California earthquake hit the region. Agassiz's statue toppled from its shelf on the façade of what was then the Zoology Building. The marble Agassiz plunged headfirst into the ground, where he stayed, feet in the air, his upper body buried up to the shoulders. The statue's swift, undignified descent became a sight to see, and Stanford students had their pictures taken with the fallen idol. In one snapshot I acquired, Stanford student Percy Blodget can be seen, looking dapper in a sports coat, tie, and jaunty hat, next to the overturned Agassiz. Mr. Blodget's left hand rests casually on the tip of Agassiz's left foot, his cocky upright posture providing a comical counterpoint to the half-hidden professor.

We know that that this is Percy Blodget because the inked inscription on the back of the little photograph, written perhaps later in life by the friend who had held the camera, identifies him as such, and while we know little else about him, we can at least say with some certainty that he was a member of the Beth Chapter of Stanford's Acacia fraternity. Had Percy and his friend made a special trip to the statue to have their pictures taken? It doesn't even matter if the bicycle, seen leaning against a pillar on the left, belonged to Percy; what matters is that the juxtaposition of bicycle and tumbled-down statue helps create a contrast between the present moment casually inhabited by the likes of Mr. Blodget, vibrant and alive even when interrupted by an earthquake, and a petrified past, stiffly monumentalized in statues that aren't even earthquake-proof.

When David Starr Jordan, whose own laboratory was significantly damaged by the earthquake, came to take a look at his mentor's statue, he heard someone quip: "Agassiz was great in the abstract but not in the concrete," a sentiment Jordan liked so much that he reported it in his autobiography. It was a good joke, to be sure, but Jordan himself must have known that it wasn't true. Agassiz's greatest quality was precisely his concreteness. What students most remembered about his lectures were the specimens he brought to class, pulling them out of his pockets as he asked his audience to touch them, or the illustrations he skillfully sketched on the blackboard. Coming from the mountains of Switzerland, where he and his assistants had spent more time than in the classrooms of the local college, Agassiz emphasized the value of fieldwork to his American students—the only way, as he put it, to "catch nature in the act" or, in his native French, "prendre la nature sur le fait." He established the first oceanographic laboratory in the history of American science on the shore of Nahant, where "hundreds of ... medusae might be seen floating together in the deep glass bowls."

But Agassiz was also an unabashed, visceral racist; it was for his benefit that the now infamous Zealy daguerreotypes of enslaved people (kept at Harvard's Peabody Museum) were taken. A new volume just published by Peabody University Press, To Make Their Own Way in the World, edited by Ilisa Barbash, Molly Rogers, and Deborah Willis, offers the most fully contextualized account yet of these images as well as of Agassiz's involvement in their production.

Whether the Stanford committee realized it nor not, Agassiz would have welcomed the rationale behind the committee's recommendation to relocate his statue instead of removing it and to treat it as an object lesson in "rock rheology." Whether he would have appreciated that he himself had become the object in question is less obvious. But it seems abundantly clear that, Percy Blodget's cockiness notwithstanding, we remain beholden to the past Agassiz embodies. The most important lesson Agassiz teaches us—one reinforced and fully explored by the essays in To Make Their Own Way in the World—is that whatever we might prize about that past (e.g. having inaugurated a new way of learning about the world that has reformed our academic practice) is inextricably tied to those aspects of it (e.g. the legacy of pervasive racism) that we would have hoped to have discarded but that continue to cripple our political and personal lives today. We have not become modern yet, not by a long shot.