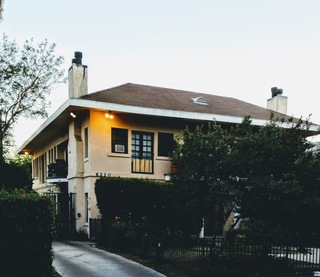 As I was writing my biography of the socialist writer Max Eastman, I became obsessed with finding out more about the woman who played an outsized role in his life, even though their relationship, rocky from the beginning, lasted for less than six years.

Florence Deshon, whose real name was Florence Danks, was an aspiring movie actress from Seattle who had already enjoyed some success in Vitagraph movies when Eastman fell in love with her, leaving his wife, the activist Ida Rauh, and his four-year-old son Daniel without ever looking back. More committed to her career than to Max, however, Florence accepted an invitation from Samuel Goldwyn and, in July 1919, relocated to Hollywood. During two tempestuous years, Florence and Max stayed in almost daily touch through the letters and telegrams they exchanged, which Cooper Graham and I have now collected, with extensive narrative commentary. Love and Loss in Hollywood will be published by Indiana University Press in February 2021. While Max remained in New York and continued to edit The Liberator, Florence starred in a variety of Hollywood movies, most of which are lost today. The handful that have survived, among them Dollars and Sense (1910) and The Loves of Letty (1919), show that she had charisma and talent galore and was destined for even greater success. Now separated by thousands of miles, both Florence and Max engaged in affairs, Max with the dancer Lisa Duncan, of "Isadorables" fame, and Florence with Charlie Chaplin, who got her pregnant (the child died in utero). Florence's story did not end well—Goldwyn broke his contract with her, for reasons that aren't clear today, and she returned to New York, where she and Max bickered. Florence died, 28 years old, on February 4, 1922, likely by her own hand, a story that we recreate in more extensive detail in Love and Loss.

As part of my efforts to make Florence come alive again, I visited Hollywood in the summer of 2014. First, I went to the Academy Archives, where curators screened the only surviving copy of The Loves of Letty for me, a memorable experience. Florence was every bit as good in the film as she herself felt she was (see her letter to Max, September 4, 1919). I must admit, though, that my appreciation of the film was a little dampened by the fact that, in the version held by the Academy Archives, the intertitles were in French. Attempting to translate them for the curators, who were watching the film with me, I inevitably missed out on some of the nuances of the film's exceedingly convoluted plot.

More successful was my quest to find Florence's former apartment at 6220 DeLongpre Avenue, where she had moved towards the end of 1919, after sending her needy and petulant mother Flora "Caroline" (who had initially joined her) home to New York. Florence likely knew who Paul de Longpré was. A successful, self-taught painter of flowers originally from France, de Longpré had arrived in Southern California in 1899. Daeida Wilcox Beveridge, often considered the "Mother of Hollywood," was so excited by the appearance of a man considered the "Le Roi des Fleurs" (the King of Flowers) that she allowed him to buy, for a discount price, a large lot she owned on Cahuenga and the northwest corner of Prospect Boulevard (later Hollywood Boulevard). It was there that de Longpré built his Moorish style mansion surrounded by lavish flower gardens, which were open to the public and where the artist himself could often be found going for walks. De Longpré's property became fledgling Hollywood's first tourist attraction. D.W. Griffith's syrupy fairy-tale short Love Among the Roses (1910), starring a young Mary Pickford, was filmed in de Longpré's gardens, with the painter's sumptuous residence providing a suitable backdrop.

De Longpré died on June 29, 1911, aged only 56, and his family returned to Europe. But his house was still there when Florence moved to the area in 1919. An early attempt to name Prospect Boulevard after de Longpré failed, but he got what later became Florence's street as a consolation prize. I bet she liked the association: de Longpré was, by all accounts, civic-minded, charming, and well-liked, a far cry from the abusive Hollywood moguls she came to despise very quickly: "They do nothing but brag about their power and what they have done for girls, and what they could do for me," Florence wrote disgustedly after a dinner with two of the men in charge, Joe Godsol, Goldwyn's business partner and eventual successor, and Hiram Abrams, managing director of United Artists (to Max, January 9, 1920).

There was ample compensation, though: Florence loved sun-bathed southern California, and she enjoyed her new residence, which at the time overlooked green meadows. Built in 1917, the house sports four units and eight bathrooms; its market value today (it came up for sale at the beginning of last year) is $6 million. Florence lived on the ground floor, in an apartment she had taken care to furnish herself. It was here that, in April 1920, she was visited by Gordon Brooke, a writer for the weekly magazine Picture-Play. Brooke was deeply impressed with her and instantly believed the rumors, actively encouraged by Florence herself, that she was at least partly a "gypsy." (She appears not to have stressed the fact that, on her mother's side, she was of Jewish descent). Brooke admired the silken blinds, the cozy fireplace, the blue carpeting made of soft velvet, and the tasteful furniture (a writing desk, some wicker chairs and a wicker table, the lounge that had an orange throw draped over it), all painted "olive-leaf gray" to match the walls, which were "powdery-gray as though dusted with pollen" and which Florence had decorated with original paintings, one by the neoclassical painter Maxfield Parrish, and a strip of Japanese paper that looked coppery in the electric light.

Of course, I wasn't able to inspect the apartment itself. But seeing the exterior somehow was enough. I had spent so much time with Florence, at least in my imagination, reading her and Max's mail, tracking down references, adding dates where they had omitted them, trying to reconstruct their inner lives. The writer and photographer Wright Morris said that people who have once lived in a house live in it forever: "There's something in the rooms, in the air, that raising the windows won't let out, and something in the yard that you can't rake out of the grass" (The Home Place, 1948). Standing in front of Florence's house, I told myself I could still feel her presence, could see the people who would come there, Max Eastman, who spent the nights with her when he was in town, their window open to the soft breeze, but also Charlie Chaplin, or that half-crazy English actor Reginald Pole, who would drop in "at all times of the day and night" and drone on, comparing Florence to "every known[n] Greek Goddess and Italian Madon[n]a" (January 15, 1920). Theodore Dreiser also stopped by for tea, listening to her rant about Max's "slickness." Were some of the magnolia trees lining DeLongpre still the same ones that Florence and her visitors would have walked under in 1920? Upon closer inspection, the low fence around the small garden plot in front of the house, where the Picture-Play photographer took a picture of Florence's sitting contemplatively next to a little ornamental pond, looks a bit like the fence that is there today.

Hollywood, to be sure, has changed considerably since 1920: said fence is quite a bit higher, the windows on Florence's house are now gated, and there are the inevitable "No Trespassing" signs. But the mild smell of marihuana blanketing DeLongpre might serve as a reminder of the different era of social experimentation fully embraced, so many decades ago, by the politically and sexually liberated Florence, who was legendary for driving her Ford Model T at breakneck speeds all over town (she had a few crashes, too). And, come to think of it, burglars were also very much on Florence's mind at that time, especially when, after reading in the Hollywood papers about a murder that had happened in New York, she discovered her front lock wasn't working properly (to Max, February 12, 1920).

Having stared at Florence's house for a good long while in the waning light of that warm summer evening, I asked a man who was lingering near the fence and looked as if he'd just emerged from the house if I could take some pictures. "Go right ahead, buddy." I walked as close to the house as I dared, rushing to capture at least some of what I had seen before the sun went down. When I was done, I thanked the man profusely. "Okay," he said, taking a drag from what I now realized probably wasn't a cigarette. "It's not my house, you know."