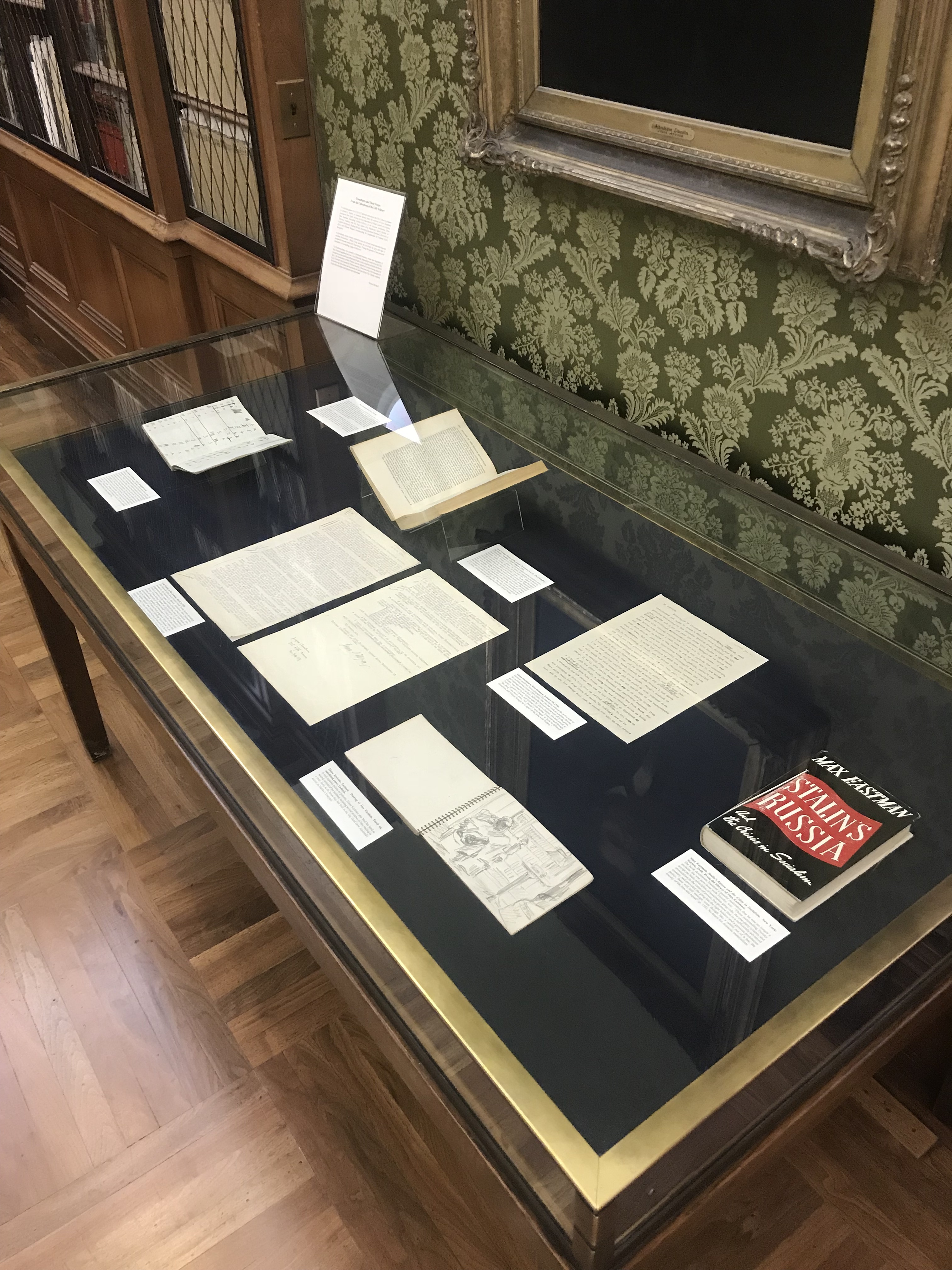 From "Translators and Their Props," The Lilly Library, October 29 - December 14

To celebrate this year’s 41st national convention of the American Literary Translator’s convention at the Lilly Library, Breon Mitchell, the Director Emeritus of the Lilly, curated an exhibit highlight materials drawn from the archives of important translators. I was privileged to be invited to curate a case focusing on Max Eastman’s activities as a translator and specifically his work with Leon Trotsky.

Max Eastman had met Trotsky during his stay in Moscow and at the Black Sea from 1922-1924. Married to Eliena Krylenko (1895-1956), the sister of Nikolai Krylenko, former commander of the Red Army and later Stalin’s minister of justice, Eastman had nativelike fluency in Russian. His first forays as a translator included a collection of Trotsky’s fugitive writings, The Real Situation in Russia (1928), and Alexander Pushkin’s poem Gabriel, with exquisite woodcuts by Rockwell Kent (1929). The highlight of Eastman’s translation work, however, was the English version of the monumental History of the Russian Revolution, which Trotsky had completed in his involuntary exile on Prinkipo Island (Büyükada), Turkey. An earlier work, Eastman’s translation of Trotsky’s biography of Lenin, Young Lenin, mysteriously vanished from his house in Croton-on-Hudson, only to resurface twenty years later at Harvard. It was published posthumously in 1972.

The case includes the lively and often funny journal Eastman kept in Russia from 1922-23. Traveling to Moscow by train, Eastman, without being able to speak the language yet, undertook his first Russian translation, a poem by Mikhail Lermontov, “Утёс” or “Mountain.” As he later recalled in his autobiography, the translation was a group effort, “Having found the words in the dictionary, I would of course have to guess their cases, tenses, and so on. This I managed with a little help from Russian passengers.” By the time he reached Moscow, on August 27, 1922, Eastman was finished. The translation eventually appeared in his collection Kinds of Love (1931). To Eastman, the lesson learned from this crowd-translation exercise was evident: “[The translator] must be primarily a writer, not a reader. Perhaps a profounder moral is that no poem is ever translated.” In the exhibit, the journal opens to the page on which Eastman had noted down, for ready reference, the letters of the Russian alphabet.

The centerpiece of the case is the third volume of Eastman’s translation of Trotsky’s History of the Russian Revolution (1933), in a copy once owned by W. E. D. Allen, a British diplomat, historian, and supporter of fascist Oswald Mosley. Allen was an expert on Georgia and the Caucasus. His extensive library, estimated, at the time of his death in 1973, to be worth about a half-million pounds, was acquired by the Lilly Library.

Trotsky was initially excited about Eastman’s work , but their relationship soured as their ideological differences increased (Eastman rejected Marx’s dialectical materialism as a form of religious thinking) increased. In a letter of March 15, 1933, for example, Trotsky criticized several of Eastman’s decisions, to which Eastman responded (in the margin of the letter): “Not a mistake.” Trotsky’s entire correspondence with Eastman is now housed at the Lilly.

Eliena Krylenko Eastman was an active (if largely unsung) collaborator in Eastman's activities. He relied on her expertise as a native speaker as well as on her services as a proofreader. As revealed in a letter from Eliena to Max, also on display, she occasionally enlisted the services of others to lighten her load (January 25, 1932). Here she describes, with her trademark dry wit, a proofreading session at her kitchen table, during which she was joined by Albert Glotzer, who had served as Trotsky’s guard in Turkey, and Glotzer’s wife Bertha. Everyone read through “the thing” one more time, “till Bertha’s eyes began to look in different directions, and Glotzer thought he is again on the boat with Trotsky.”

The inevitable finally happened. Incensed by Stalin’s ruthlessness (Eliena’s entire family had perished), Eastman realized that he could no longer call himself a socialist. And he broke with Trotsky, too. In Stalin’s Russia and the Crisis in Socialism (1940), represented in the exhibit by a copy from Eastman’s own library, he explained: “Those surrounding Trotsky accept the basic principles of totalitarian gang-rule, the one-party tyranny and immoralism in the cause of power, but promise that in a sufficiently advanced country, and provided the gang has the right leaders and a genuine proletarian policy, there will still emerge, even though like a rabbit out of a hat, the society of the free and equal” (p. 155). So much for dialectical materialism.