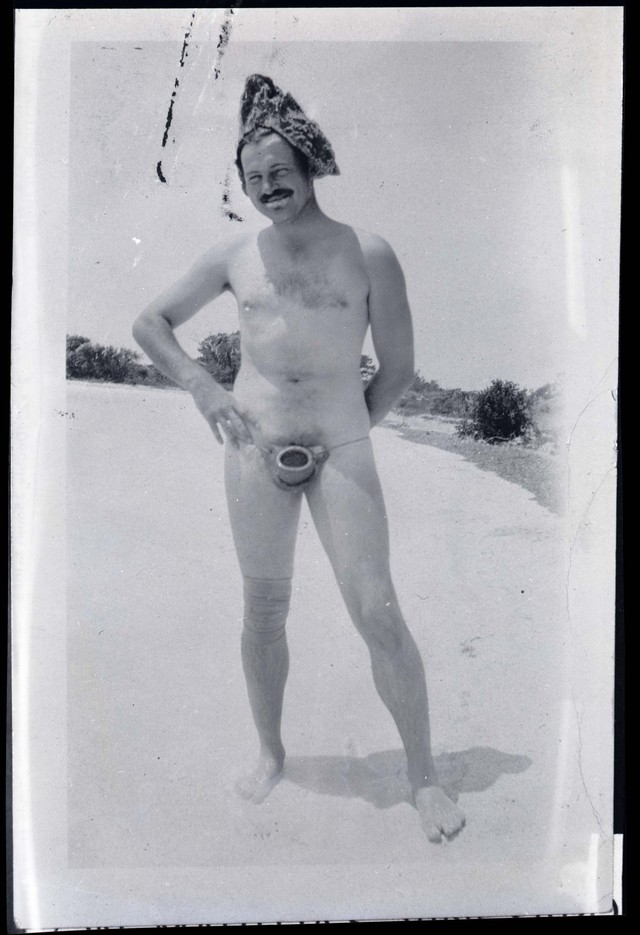 From the blog of the Lilly Library:

The poet, editor, and activist Max Eastman (1883-1969) was one of the handsomest men of his time. His film star looks melted the hearts of women right and left and, judging from the letters they sent him, they were not content with worshipping him from distance. A fervent believer in what might be called the “big tent” approach to modern love, Eastman readily invited his female fans into his life, if mostly for brief periods of time and with the understanding that he had not promised them anything at all. In 1925, when Eastman, having returned from Bolshevik Russia, was frequenting the coffee shops of Paris, Hemingway was a member of his circle of friends. Max deeply admired Hemingway’s In Our Time and even toyed with the idea of having his wife Eliena—the sister of Stalin’s favorite prosecutor Nikolai Krylenko—translate it into Russian. But his respect for the writer didn’t extend to the person. In Great Companions (1964), Max records a terse exchange that he had with Hemingway, who guiltily shared with him the pleasure he got from staring at the girls in the Parisian dance halls. Coming home from his nights in Montmartre, Hemingway was, he told Max, “disgusted” with himself. He asked Max if he felt so, too. Max, an early convert to Freudian psychoanalysis, had little patience for such talk: “No, I don’t, Ernest. I enjoy lustful feelings, and what’s more I don’t think you’re talking real.”

As Hemingway turned his adolescent approach to sex into literary method, Max’s respect for the writer took a hit too. Reviewing Hemingway’s Death in the Afternoon, a book about bullfighting in Spain, Max freely expressed his frustrations with Hemingway’s masculine swagger. His heart went out to the bull in Hemingway’s narrative, “this beautiful creature … gorgeously equipped with the power for wild life, trapped in a ring where his power is nothing.” Max had no sympathy for the toreros who would hunt the animal till he would sink down, “leadlike into his tracks, lacking the mere strength of muscle to lift his vast head, panting, gasping, gurgling, his mouth too little and the tiny black tongue hanging out too far to give him breath, and faint falsetto cries of anguish, altogether lost baby-like now and not bull-like, coming out of him.” Max accused Hemingway of deriving pleasure from such callous acts of murder, an attitude he compared to the “wearing of false hair on the chest.”

Hemingway’s supporters were outraged. “I don’t know when I have written anything that I have heard more about from various sources than that article,” said Max. Nevertheless, he included the review in a book he published in 1034, Art and the Life of Action. Two years later, as Max was hanging out in the office of his editor at Scribner’s, Maxwell Perkins, look who happened to drop in: Ernest Hemingway, en route back to the Spanish Civil War! Hemingway relished the opportunity to exact revenge on Max. To Perkins’s consternation, he ripped open his shirt and invited the men to inspect his chest hair. He then proceeded to tear open Max’s shirt, too, revealing a chest that was, Perkins recalled, as “bare as a bald man’s head.” Rifling though a copy of ,Art and the Life of Action, which just happened to be lying on Perkins’s desk, Hemingway yelled out a particularly objectionable sentence and then, for emphasis, socked Max on the nose with the book. Max lunged at Hemingway, and both men fell on the ground. By the time Perkins had reached them, Max was on top of Hemingway, although that might have been an accident. Max declared himself the winner. Given his age he had, he told the press, used a wrestling move to take Hemingway down. Hemingway assured the Times that no such thing had taken place, and that Max instead had taken his slap “like a woman.” But there is one detail that does make Max’s account somewhat credible: he did know how to wrestle. Decades ago, while he was John Dewey’s student at Columbia University, he had coached a wrestling team in a Lower Eastside boys club.

Max never forgot what had happened. As Hemingway went from one well-publicized risky adventure to the next, Max continued to insist on his own version of masculinity that involved not loud displays of virility but a deliberate celebration of the human body and its infinite capacity for pleasure. As it turned out, he was not the only one with a grudge against Hemingway. Decades after the battle in Perkins’s office, a mutual friend of both men, the painter Waldo Pierce, presented Max with a surprise gift. In the 1920s, Pierce had been Hemingway’s fishing buddy in Florida, and it was on one of those occasions that Pierce had persuaded Hemingway to pose for his camera wearing nothing but a kind of turtle-shell on his head and the butt-rest of a fishing rod around his privates. I recently discovered the original photograph in Max’s extensive papers housed at the Lilly Library. Hemingway had sometimes needled Pierce for his devotion to his family (in a letter to Dos Passos, he once called him a “domesticated … cow”). Well, here was Pierce’s chance to retaliate. Before he sent the compromising photograph to Max, he inscribed it on the back: “The great Pescador hiding his light under a but-rest [sic].” Max, with evident satisfaction, noted the near-absence of chest-fur. And he published the photograph in the second volume of his autobiography, Love and Revolution (1964), accompanied by the sarcastic caption, “Hemingway in the twenties.” By then, Hemingway had been dead for three years.

Whether Max or his publisher balked, we don’t know. But in the published version of the photograph, Hem is wearing a pair of dainty swimming trunks. No matter, Max had finally won the battle.

Christoph Irmscher’s biography of Max Eastman, Max Eastman’s Centur, which contains an in-depth discussion of the material discussed above, will be published by Yale University Press.