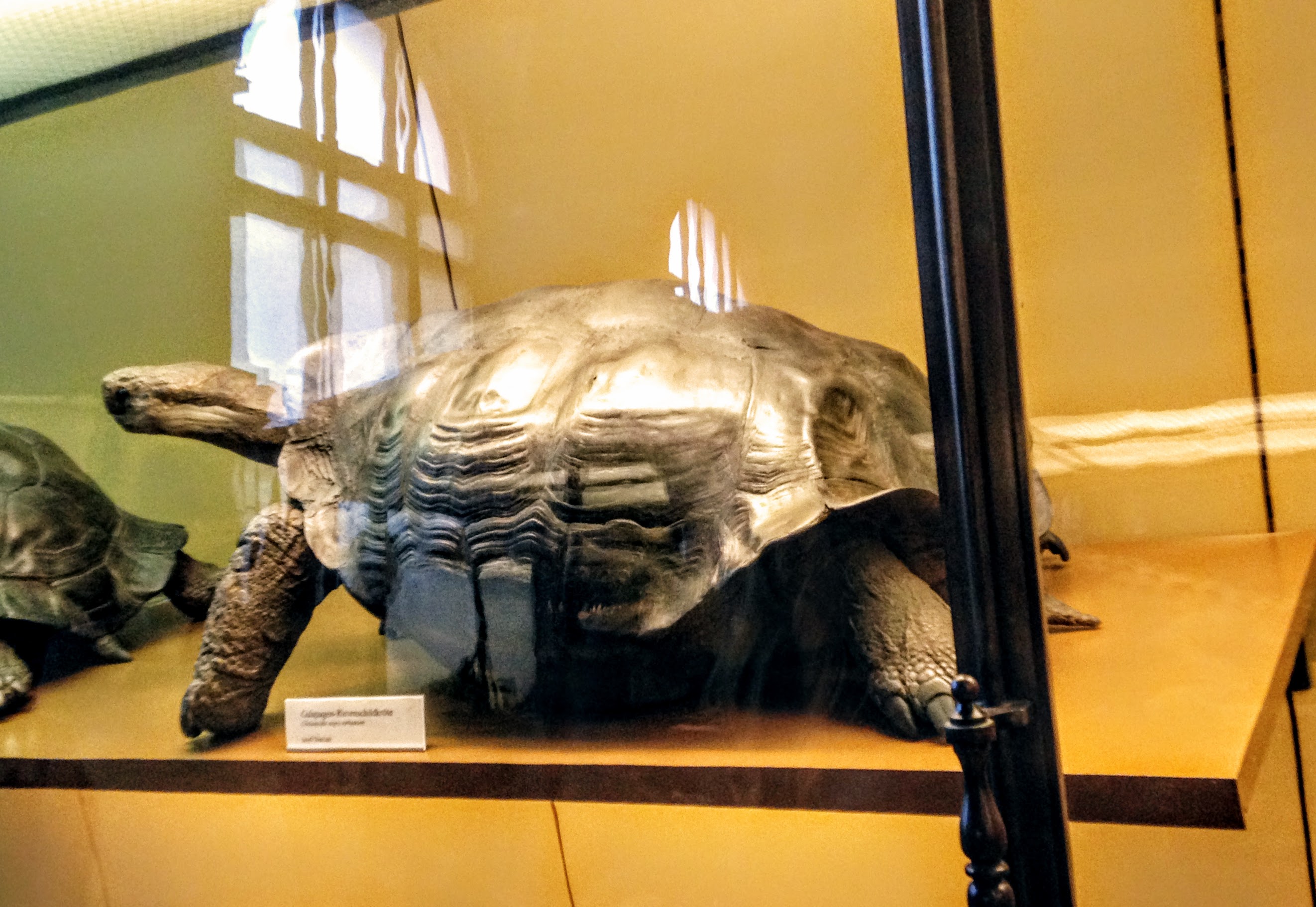 Galapagos tortoise in the Vienna Museum of Natural History. Photograph by the author.

Franz Steindachner (1834-1919) was the curator of the fish, amphibian, and reptile collections at the Natural History Museum in Vienna when his work on South American fish came to the attention of the world-famous Professor Louis Agassiz at Harvard University. Always on the prowl for talent he could exploit, Agassiz invited Steindachner to come work with him. Steindachner became a key participant in Agassiz's "Hassler" expedition (1871-73), which traveled along the eastern coast of South America through the Straits of Magellan to the Galapagos Islands before ending up in San Francisco.

At first, Dr. Steindachner didn't have an easy time adjusting to his new American environment. There were no coffee houses in Cambridge, Massachusetts, and everything cost an arm and a leg, as he compained to his sister back home--she wouldn't believe him if he told her how much he had to pay for a simple water pitcher. While Steindachner liked the way American women looked ("thin and graceful as sycamore trees," a remark aimed directly at his pastry-loving relatives in Vienna), he thought the men were strange and offish. They looked like "manservants." And everyone was talking too fast, swallowing half the syllables in each word they uttered.

To be sure, Dr. Steindachner had come with his own share of idiosyncrasies. It is said that when he was summoned for an audience with Emperor Franz-Joseph, he inked his underwear so no one would see the hole in the seat of his black pants. In another celebrated instance, when he was in the process of returning to Austria from Brazil, he traveled hundreds of miles back to Monaco to retrieve an umbrella he had forgotten.

But never mind that umbrella—in Steindachner's universe, fish trumped everything. He thought nothing of keeping visitors waiting for hours when he was preoccupied with his ichthyological collections. Despite his eccentricities (or perhaps because of them), people found him instantly endearing. Steindachner was "like a woman," noted Elizabeth Agassiz, Louis Agassiz's wife, who got to know him well during the Hassler expedition, "kind and unobtrusive,—as obliging as he is modest" and seemingly immune to heat, rain, or sun: "he works through every thing—up early & to bed late and always busy."

Steindachner's persistence exponentially increased the number of specimens Agassiz's men collected, though it apparently it was lost on the ship's pet parrot, who refused to learn to say "Guten Morgen" ("I fear me he is a stupid bird"). In one really unexpected way, however, Steindachner's doggedness paid off in spades. At the end of the Hassler expedition, precisely because no one would have thought him capable of such a thing, he nabbed a large part of Agassiz's natural history loot for his museum in Vienna. The great Agassiz himself liked to boast that, during the Hassler voyage, his team had netted thirty thousand specimens. But we also know that only seven thousand specimens actually made it to Harvard—you do the math. All Dr. Steindachner had to do is readress the barrels.

It appears that, for all the gratitude he professed, Steindachner had maintained a healthy skepticism toward his mentor's skewed ideological principles. In his Schlangen und Eidechsen der Galapagos-Inseln (1876), instead of engaging in the Darwin demonization his mentor would have required, Steindachner quietly agreed with most of the scientific observations about these islands Darwin had shared in his Voyage of the Beagle.

For example, Steindachner directly engages with Darwin in his comments on Amblyrhynchus cristatus, a species of marine iguana endemic to the Galápagos. Much of this description is vintage Steindachner, an exact accounting of how many scales one finds on the head and where, of the position of the nostrils, and of the pigments on their skin. Even the animal's lips, used to scrape seaweed of the rocks, are described with absolute precision: they consist of twelve to thirteen small square scales, growing in size and breadth towards the ninth or tenth infralabial plate (the scale bordering on the lower jaw), whereas the median plate, the scutum mentale, is smaller and has a blunt tip. And so forth. The marine iguana, in Steindachner's hands, becomes a work of art. Whereas Darwin's notes go on about how stupid these lizards were, Steindachner watches them disappear when humans approach, smartly retreating into the safety of the water.

Like Darwin, Steindachner devotes several pages to the non-swimming variant of the Galápagos lizard, the land iguana. After extensive notes about the animal's skin, coloring, and skeleton, he allows himself only a slight demurral from his model Darwin, pointing out that these lizards aren't in fact always smaller than their sea-going relatives, as Darwin had claimed: several of the individuals Steindachner caught on Albemarle Island (now Isabela) weighed in at a whopping 22 pounds.

When he left Cambridge for Vienna in 1873, Steindachner avoided saying good-bye to his boss. He was done with an approach to nature that uneasily mixed fieldwork and theology. If Agassiz's science consisted in counting the scales on a snake's back to prove that the location where he had found the animal was the very place where God had originally created it (or rather its ancestors), Steindachner was content to count just the scales, and, because he wasn't distracted by thoughts of God, to do a better job of counting them than anybody else. His superiors paid attention: In 1876, Steindachner became director of the "Zoological Court Cabinet" at the museum; twenty-two years later, he ascended to the museum's directorship.

One of the most illustrious ichthyologists of his time, Steindachner was as self-effacing as Louis Agassiz was blustery and pompous. Uncontaminated by Agassiz's virulent racism, Steindachner easily reconciled his passion for fieldwork with a pragmatic understanding of museum culture. He was the cosmopolitan scientist his friend Agassiz, for all his worldliness, never became. As Dr. Steindachner noted proudly in a letter to Elizabeth Agassiz,"'In Wien faengt Europa an" (In Vienna, Europe begins). By the same token, one could also say that, given Franz Steindachner's success in funneling Agassiz's specimens to his Austrian museum, Vienna was where America, or parts of it, ended.

For more on  Steindachner, see my new article, "'In Gedanken in America': The Evolution of Franz Steindachner," just published in Transatlantic Elective Affinities, ed. Waldemar Zacharasiewicz and Herta Nagl-Docekal (Austrian Academy of Sciences Press, 2021), 79-106. The current essay, as well as the longer article, are based on original research in the Naturgeschichtliches Museum in Vienna.