NEW REVIEW BY FELICE PICANO IN THE GAY AND LESBIAN REVIEW

"A notebook of someone who wants to be a poet, who must be a poet.... From the first 'Sonnet on Absence' of May 1st to the 26th poem of July 23rd, we can watch Spender grow as a writer by leaps and bounds.... Christoph Irmscher's fourteen-page introduction, along with his bibliography and notes, tell you all you need to know about the manuscript's history and its details."

NEW REVIEW IN THE LONDON REVIEW OF BOOKS 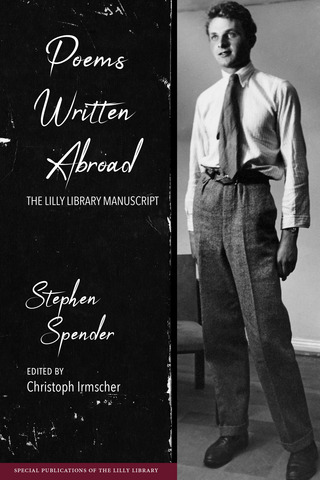 The first publication of the earliest collection of poetry by the famous poet, novelist, literary critic, translator, and radical, Sir Stephen Spender (1909-1995). Spender wrote and compiled this manuscript in 1927, when he was living in Nantes and Lausanne. In tone and diction, Spender’s poems range from creatively traditional to unexpectedly innovative. They reflect his reading in Shakespeare and French poetry, as well as his absorption in music and modern art. They also document his struggles with his sexual identity and his emerging desire to devote his life, at whatever cost, to the writing of poetry.

This beautiful facsimile edition, authorized by the Spender estate, faithfully reproduces the features of the original manuscript now held by the Lilly Library, including the frontispiece, an ink drawing by Spender himself, and little-known photographs of the poet. An extensive introduction and detailed explanatory notes situate Spender’s juvenilia in the context of his life and work and the history of modern poetry. The volume will appeal to all readers with interests in modern poetry, gender studies, and fine books.

"Crackling with sensuality and ... poetic ambition."
— Jim McCue, editor (with Christopher Ricks) of The Poems of T. S. Eliot

"Irmscher (Indiana Univ.) has done a scrupulous and graceful job in recovering Spender's previously lost manuscript of youthful poems. Handwritten in a notebook, the poems were penned in 1927, when the poet was 18 years old, and the pages of the notebook are beautifully reproduced. Spender (1909–95) is best known for his close association with the British Left and the Auden-MacNeice circle during the 1930s and for poems such as "The Pylons." The early poems show he was already alert to English and European literary traditions, and though the poems retain the aroma of 19th-century verse, they provide their own unique pleasures. Irmscher's introduction presents a partial biography of Spender, including the story of the notebook's disappearance and Spender's attitude toward his early work. In this discussion, Irmscher connects the themes and "voice" of these poems to the work that would come later. He makes good use of Spender's autobiography, World within World (1951), as well as Spender's life work. Including excellent explanatory notes and a full bibliography, this volume will be welcomed by bibliophiles and those interested in British poetry and 20th-century literature in general.

"This beautiful book allows us to witness the birth of a poet. Poems Written Abroad offers a fascinating record of travels and emotions in verse, touching for its youthfulness and impressive for its variety and intensity. Traveling in France and Switzerland, through the undiscovered terrains of poetry present and past, guided by a young master learning his trade—what could be more delightful?"
— Massimo Bacigalupo, author of The Forméd Trace: The Later Poetry of Ezra Pound

"The interest of this beautifully presented volume from the Lilly Library, expertly edited by Christoph Irmscher, lies both in its author and in its moment. Stephen Spender is one of the central lyric poets of the first half of the 20th century in Britain. Ardent, clumsy, excruciatingly open, Spender was for a while a major conduit through which European styles of writing flowed into British poetry. This carefully organized (and decorated) book of poems, composed by an 18-year-old Spender in France and Switzerland during the summer of 1927, shows a young, painfully self-conscious writer [embracing] a generous internationalism that sought to resist the gravitational pull of the national ties Eliot had accepted."
— Nicholas Jenkins, coeditor of "In Solitude, for Company": W. H. Auden after 1940