Too Early and Yet Too Late 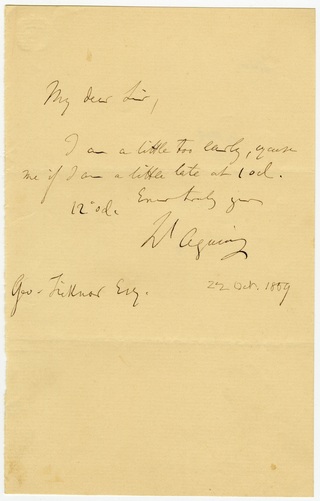 Also in my collection is a little note in Agassiz’s thin, spidery handwriting, so fine that it seems more feminine than that of his wife, a note scribbled hastily on a small sheet of stationery, just a half page ripped off a larger sheet, as one would expect from someone who was socareless with his own things. The ink has faded over the years, as has the knowledge of the occasion on which this note was written. More than halfway down the left side of the page appears the name of the addressee, “George Ticknor, Esquire,” the former Smith Professor of French and Spanish at Harvard University, who had devoted the later part of his career to helping establish the Boston Public Library. “My dear Sir,” Agassiz had written to Ticknor on 22 October 1859, exactly a month before the publication Darwin’s Origin of Species, “I am a little too early, excuse me if I am a little late at 1 ocl.” He signed the note, “12 ocl. Ever truly yours, L. Agassiz.” Having come too early at twelve o’clock, he had left again, apparently resigning himself to the prospect that upon his return at one o’ clock, he’d be late.

It’s hard not to think of this note as emblematic of Agassiz’s life, too. He was too early for his own good in some ways, in imagining science as an activity which could be practiced by everybody, as a collaboration between several investigators, as an enterprise requiring money and fundraising skills, where the right set of moves would determine the right outcome. And he was unforgivably late in other ways, in his conviction, for example, that nature was made for human purposes only or in his skewed view that blacks were inferior to whites. And while he firmly believed—and staked his career on making that belief a reality—that science was something to be practiced by the many, he also believed that the results of such collaborative activity really belonged to only one: namely Agassiz himself. The trivial note to Ticknor thus acquires a more complex meaning. For this is how Louis Agassiz appears in my forthcoming biography: a visionary in some ways, he was a hopeless reactionary in others--truly a multi-dimensional character.  Read More