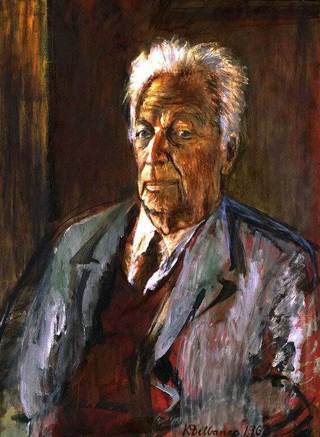 (from Face to Face,
published by the National Portrait Gallery, November 7, 2017)

In 1968, one year before his death, during a period in his life already overshadowed by intense anxiety and mounting health problems, the writer and poet Max Eastman sat for the painter Kurt Delbanco. Eastman’s eighth-floor apartment, where his wife Yvette continued to live until she died in 2011, with its high ceilings and large windows, was perfect for the occasion. There would have been ample light, and the New York traffic would have been never more than a distant rumble, sirens, blaring car horns, the shouts of passersby muffled into pleasant indistinctness, faint reminders of a world that had become increasingly irrelevant to Eastman.

It is difficult to imagine a greater contrast between two men: the sociable, quirky, round-faced and cheerful Kurt, a “practical optimist,” in his own words, who charmed all who met him, and the occasionally self-righteous, often brooding, and permanently disappointed ex-socialist Max. Through Kurt’s son Nicholas, a novelist Max had taken under his wings, the two men had become friends. When you take someone’s portrait, too much familiarity can be an obstacle, a photographer friend of mine once told me when I had asked him for exactly that favor. Portraits are complicated transactions, to be sure, first between the artist and the sitter, but also between the viewer and the portrait itself. Mental or actual, a portrait is an intellectual process. Proust’s narrator, in Swann’s Way, observes: “We pack the physical outline of the creature we see with all the ideas we have already formed about him . . . they come to fill out so completely the curve of his cheeks, to follow so exactly the line of his nose, they blend so harmoniously in the sound of his voice that these seem to be no more than a transparent envelope.” In the end, Proust suggests, it is our own ideas of a person that we recognize when we see his or her face portrayed, a face from which we leach particular and unique distinction.  Read More