“To Be Born Is to Be a Robinson Crusoe”: Rediscovering the Young Stephen Spender 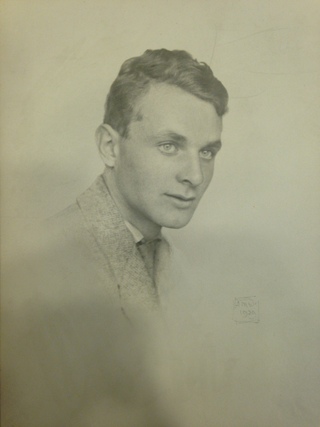 Stephen Spender in 1928. Unknown photographer. Courtesy of the Lilly Library.

Indiana University Press has just published a beautiful facsimile edition of Sir Stephen Spender's earliest poems, an unpublished chapbook titled "Poems Written Abroad" now in the collections of the Lilly Library. The introduction, transcriptions, and extensive notes were produced by me. I couldn't be more delighted with this handsomely designed book.

The poems, written by an anguished, recently orphaned 18-year-old who had been sent abroad to France and Switzerland to sort out his life, are clearly the work of a poet at the beginning of his career. Spender had been reading the Georgian poets (such as Rupert Brooke and Robert Graves) as well as Rimbaud and, more recently, T. S. Eliot—a complex mix of influences, to be sure. Some of his poetic conceits might seem contrived, his syntax at times comes across as a little tortured, and there are some of those clumsy rhymes to be expected from someone who is still working to find his own place in the universe of poetic possibilities that he has inherited.

That said, there are so many wonderful and effective texts in that chapbook, too, including a poem painting a despondent vision of the world as a place of universal slaughter, beginning with the animals ("brothers Ox, and Lamb"), whose killing in the name of God Spender likens to forms of Christian martyrdom. "Written after the Fête de Dieu at Nantes (June 16) on June 17th" was, as the title suggests, inspired by a parade held as part of the Festival of the Blessed Sacrament in Nantes. It ends on a chilling note: "And I shall think of how at Death's cold jaws / Christ's heart broke so loud men heard it crack." Yet Spender also knows that the "milkwhite horizon" of his impressionable mind, as he calls it in another poem ("Tail-piece"), fatally limits his ability to envision any change in the way the world works: "All men are creatures of vicinity, / And to their neighbours' thoughts, react or mound" ("Two Sonnets," II).

Spender has sometimes been regarded as excessively self-absorbed, but "Written after..."  leaves us with a compelling picture of the emotional turmoil that the suffering of others would always cause him as he transformed himself into one of the more socially aware writers of the 20th century. As is well-known, he joined the Communist Party in 1936 and went to Spain to observe the Spanish Civil War for the Daily Worker. Even after he renounced communism and became, in the eyes of some, a bit of a Cold Warrior, Spender never relinquished his belief that poetry would lose its relevance when disconnected from the concerns of ordinary people.

Spender was always honest about the inner ambivalences that made him a somewhat unreliable spokesman for political causes. In the essay he contributed to The God That Failed—a signature 1949 collection, in which writers from André Gide to Richard Wright lined up to confess to their disillusionment with communism—Spender reflected critically on his own cushy upbringing and the social responsibility he felt in his childhood, even if such responsibility was the result of personal awareness rather than of political commitment: "What had impressed me most in the gospels was that all men are equals in the eyes of God, and that the riches of the few are an injustice to the many. My sense of the equality of men was based not so much on awareness of the masses as on loneliness. I can remember lying awake at night thinking of this human condition in which everyone living, without the asking, is thrust upon the earth, where he is enclosed within himself, a stranger to the rest of humanity, needing love and facing his own death."

The crushing weight of loneliness as the root for the poet's desire to hold communion with others shapes Poems Written Abroad, as does young Spender's fervent wish to be able to enjoy, liberated from any feelings of guilt, the riches the world has to offer (by which he also meant sexual experiences).  And if Stephen Spender, descended from an entitled family or writers and artists, wasn't fully free to partake of such riches, who would be? "Since to be born is to be a Robinson Crusoe cast up by elemental powers upon an island," he continued in the 1949 essay, "how unjust it seems that all men are not free to share what nature offers here; that there should be men and women who are not permitted to explore the world into which they are born, but who are throughout their lives sealed into leaden slums as into living tombs."  Looking back on his youth, the private agonies of which are so vividly dramatized in Poems Written Abroad, Spender concludes: "It seems to me—as it still seems—that the unique condition of each person within life outweighs the considerations which justify class and privilege." A weak answer to the world's problems as well as to Spender's own predicament, some might say. But behind it lies, shrouded by the veil of typical Spenderian cautiousness, the conviction that Heaven becomes Hell only "if you would make it so" ("Two Sonnets,” II).