A Visit to Friedrich Gerstäcker's Study 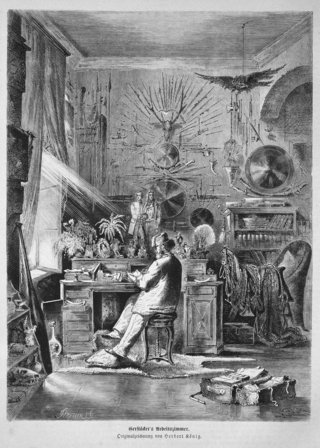 The writer Friedrich Gerstäcker died on May 31, 1872, Braunschweig, Germany. Later that year, Die Gartenlaube, a popular periodical which had published Gerstäcker’s works, too, published an unusual obituary, remembering the famous travel writer by way of the stuff he had owned and displayed on the walls of his study. It also provided an evocative engraving featuring Gerstäcker amidst all his trophies. We offer that text here for the first time in English translation. The final plea for keeping Gerstäcker’s legacy intact is a poignant one especially today. In 2016, the city of Braunschweig refused to help maintain the Gerstäcker Museum, a shrine to the writer’s legacy, compiled by a scholar and enthusiast, Thomas Ostwald. It is now permanently closed. Here is Gerstäcker's "obituary," devoted, as he was, to his stuff:

Regarding our dear Gestäcker, it could be said that, despite his true German heart, “he was at home when abroad,” and, as his study irrefutably proves, and “abroad when at home.” Wherever his eye traveled, each of the walls in his study greeted him with a memory of the exotic folk he had visited, and of the adventures and dangers he had braved in his long peripatetic life. Many a beast that had threatened him with certain death was now a patient skeleton on his wall, watching his daily preoccupations, and many an outlandish implement on the wall could have caused him moments of terror if his skin had not been so hardened to such things. For example, right there on the left was the oar with whose help he had traversed American waters, and most fearlessly among those the Mississippi; and there we see the saddle reminding us of reckless rides across pampas and prairies; and over there are the lassos for catching horses and the hammocks for unenviable nights spent among all the flying and creeping creatures of the jungle. How deeply must he have felt at times, he who had survived so much unscathed; the long shelf of his writings tells us how conscientiously he nurtured and exploited all those memories. Even the chair and the foot of the laboring writer rested on what he had bagged during one of his hunts, and lest we forget for even one moment that it is Gerstäcker who is sitting before us at his desk, his traveling suitcase lies all packed next to him on the floor. To the viewer it seems that we shouldn’t have to wait long before Gerstäcker stops to add his trademark “if I rest, I rust” to the letter he is writing, closes his suitcase, and waves his hat for a new farewell!—But in fact the final farewell has already been said, and Gerstäcker’s “last journey” is done.—Wouldn’t it be sad if those decorations, as wild as they are valuable, assembled by such a unique hand from such far-flung locations, were to be sold and dispersed in all directions? Shouldn’t there be a friend somewhere of such inestimable treasures of cultural and historical value who would take them in their entirety? Such an acquisition would not only bring all those things but also, most importantly, honor to your home.