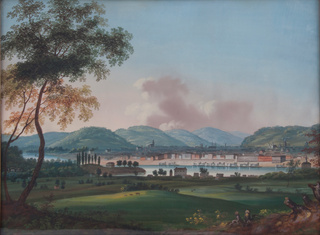 Charles Adams and I are very pleased to publish this month a guest post by Dr. Tolzmann, an expert on German-American relations especially with regard to the history of Ohio. Dr. Tolzmann was inspired by our new translation of Friedrich Gerstäcker's The Arkansas Regulators, out this month from Berghahn Books. To get in touch with Dr. Tolzmann, consult his homepage at www.donheinrichtolzmann.net.

Anyone interested in Friedrich Gerstäcker will welcome the new edition of his novel The Arkansas Regulators, translated and edited by Charles Adams and Christoph Irmscher. Gerstäcker embarked from Bremerhaven, arriving in New York shortly before his twenty-first birthday on 10 May 1837, and then: "Over the next four years, he spent about thirty months in Arkansas, including two extended periods in 1839-40 and 1842." (1) And, in 1843, he returned to Germany.

While reading The Arkansas Regulators, I recalled that several of Cincinnati's German-American historians had mentioned Gerstäcker's visits to the Queen City of the West.

The first author to mention Gerstäcker was Emil Klauprecht, a Dreissiger who came to America after the 1832 Hambacher Fest. In his history of the German element in the Ohio Valley, published in 1864, he writes that Gerstäcker was interviewed for a position as a German teacher in the newly established German-English public schools in Cincinnati. Although he does not mention the date, this must have been by mid-1840, as the schools opened that fall. According to Klauprecht: "The schools filled so rapidly that it soon became necessary to hire more teachers. Among those candidates for a teaching position and who had passed an examination before a committee was a young man from Hamburg, whose intelligent appearance along with his garish clothes aroused attention. He wore a blue coarse striped jacket, fastened with a belt, into which were stuck a hunting knife and a tomahawk, wide trousers from the same material, and a weather-beaten, rolled-up straw hat." (2)

Klauprecht goes on to comment on Gerstäcker's arrival in Cincinnati and subsequent activities: "With a musket on his shoulder, he had hunted and hiked the entire distance from New York. During the years 1837-41, one after the other, he was a pharmacist's helper, a silver smith, a fire stoker on a steamer, a keeper of horses, a speculator in Arkansas cane, and he was known as one of the first to help in case of a fire. His favorite haunt was among the prairie dogs, raccoons, porcupines and owls of a small private zoo, with whose aromas, its owner, a German optician by the name of Gerhard, had filled his workshop as well as the house of the lawyer Fox on 5th Street, where the zoo was located. That candidate for a teacher's position in the local German free schools later became the famous travel writer and novelist, Friedrich Gerstäcker." (3)

The next Cincinnati reference to Gerstäcker comes from an article about him by H.A. Rattermann, editor of the German-American historical journal Der Deutsche Pionier. Published in 1874, his article recounts a social get-together with Gerstäcker that took place in Cincinnati on 21 August 1867, where Rattermann got to know the author. Meeting with several others who must have known him, Gerstäcker remarked on how beautiful the Queen City of the West had become, and that had he not family in Germany, he might possibly succumb to the temptation of moving to Cincinnati. (4) Read More