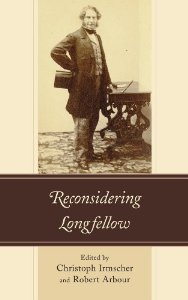 February 27, 2014, was Longfellow's 207th birthday--a good occasion to remember one of the world's most popular poets (and still one of the most musical in the English language). There are other reasons to celebrate him today: Longfellow supported women writers, was a committed pacifist as well as an unabashed cosmopolite--he spoke nine languages fluently and was able to read a dozen more. As he saw it, American literature, to be credible at all, had to become international, an antidote to what he regarded as the literary parochialism of his literary contemporaries. Not coincidentally, he was also the first major American writer to publish a collection of anti-slavery poems. Slavery made, he said, "every drop of blood" in him "quiver." He supported the Underground Railroad financially and castigated his fellow citizens for arresting fugitive slaves: "Dirty work for a country that is so loud about freedom as us." Fairleigh Dickinson Press marked Longfellow's birthday with the first collection of essays entirely devoted to the Cambridge poet in several decades, Reconsidering Longfellow, edited by Christoph Irmscher and Robert Arbour: ten original essays that cover the entire range of Longfellow's work, from the early poetry to the long poems of the middle period to his Chaucerian collection published after the Civil War, Tales of a Wayside Inn. Separate chapters deal with Longfellow's interest in the visual arts and the use of his poetry in the modern classroom. For more information, click on the link to your left. Read More