In February 2018, I had the great good fortune of being cast as the "Haushofmeister" (Majordomo) in IU Opera Theatre's production of Richard Strauss' opera Ariadne auf Naxos, my first major role in decades. Conducted by Maestro Arthur Fagen and directed by James Marvel, this production was a feast for the eyes. Click on the image to watch a complete recording, which has now been made available. I appear at 2:56 in the video. 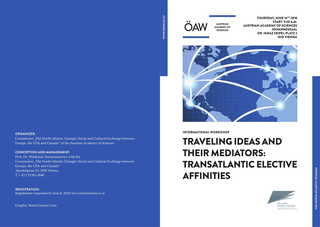 Speaking at the Austrian Academy of Science

On June 14, I will be in Vienna, Austria, speaking at a conference ("Traveling Ideas and their Mediators") organized by the Austrian Academy of Science. My topic: "'In Gedanken in Amerika': The Evolution of Franz Steindachner." This will mark a return to terrain covered in my biography of the American scientist Louis Agassiz, who was Steindachner's mentor. Here's the abstract of my talk:

Franz Steindachner (1834-1919) was the curator of the fish, amphibian, and reptile collections at the Natural History Museum in Vienna when his work on South American fish came to the attention of the famous Agassiz at Harvard University, who invited Steindachner to come work for him. During the so-called Hassler expedition (1871-73), which traveled along the eastern coast of South America through the Straits of Magellan to the Galapagos Islands before ending up in San Francisco, Steindachner quickly established himself as the prototype of the nerdy scientist who cares about nothing but his work. He was “like a woman,” wrote Elizabeth Agassiz, “kind and unobtrusive,--as obliging as he is modest” and immune to heat, rain, or sun: “he works through every thing—up early & to bed late and always busy.” His persistence exponentially increased the specimens they bagged, though it did not pay off with the ship’s parrot, who refused to learn to say “Guten Morgen” (“I fear me he is a stupid bird”). Steindachner’s reputation for dogged simple-mindedness seems to have served him well: at the end of the trip he pilfered a large number of Agassiz’s specimens for his museum. It also appears that, for all the gratitude he professed, he maintained a healthy skepticism towards his mentor’s skewed ideological principles. In his Schlangen und Eidechsen der Galapagos-Inseln (1876), instead of engaging in the demonization his mentor would have required, Steindachner quietly agreed with most of Darwin’s natural history observations.

In 1876, he became director of the "Zoological Court Cabinet”; 22 years later, he ascended to the museum’s directorship. One of the most illustrious ichthyologists of his time, Steindachner was as self-effacing as Louis Agassiz was blustery and pompous. And unlike his brilliant mentor, he did not remain stuck in the mold of a science based on theological preconceptions. Drawing on unpublished sources, including Elizabeth Agassiz’s letters and Steindachner’s letters to Alexander Agassiz, my talk traces the evolution of Steindachner’s science as he works to reconcile his American passion for fieldwork with the realities of institutionalized science in Austria. Steindachner became the cosmopolitan scientist his friend Agassiz, for all his worldliness, never was. As Dr. Steindachner noted proudly in a letter to Elizabeth Agassiz,"'In Wien faengt Europa an." 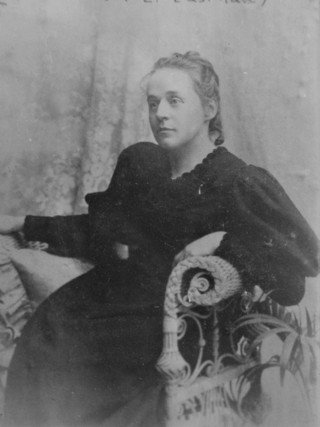 A panel discussion of the men's engagement with women's rights from the early 20th century on, with New York Times columnist Gail Collins and biographers Christoph Irmscher and Brooke Kroeger. Click on Annis Eastman's photograph to watch a video of the entire event. 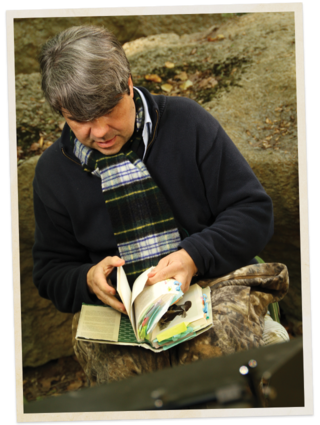 Christoph Irmscher in New Audubon Film:
Listen to His Interview on WFHB!
Click on the image to listen to a conversation with Doug Storm broadcast on WFHB's Interchange on December 6, 2015, with Christoph and two-time Academy Award-nominated filmmaker Al Reinert about Reinert's new documentary Audubon. John James Audubon was “an archetypal American who astonishingly combined in equal measure the virtues of George Washington, Daniel Boone and Benjamin Franklin.” (Lewis Mumford). Reinert’s documentary unfurls Audubon's life experiences in such an artful portrayal that you will feel as though you are with him on his adventure across America pursuing his dream of painting life-size images of all the birds species of America. Christoph is featured extensively throughout the film. For more information on the film, go to http://www.audubonthefilm.com/. 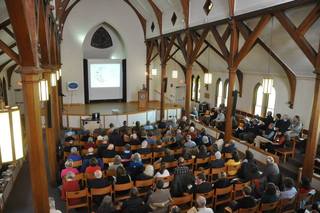 On November 15, I will be speaking about Darwin and Agassiz at the Dorothy Schwartz Forum hosted by the Maine Humanities Council in Portland, Maine. Click on the image on the left to access a podcast of my lecture. 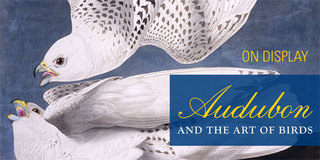 Audubon and the Art of Birds

On Thursday, February 6, 2014, 4 p.m., I will be speaking about "Audubon's Modernity" at the Bell Museum of Natural History, University of Minnesota, Minneapolis. Click on the image to the left for more information about the exhibit. The talk will be followed by a gallery conversation with Dan Philippon on "Audubon as Author." 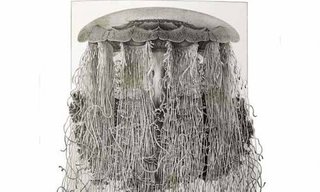 On March 7, 2014, 7:30 p.m., I will be speaking in the Lillie Auditorium of the Marine Biological Laboratory at Woods Hole on "Revisiting Louis Agassiz." Click on the illustration--taken from Louis Agassiz's Contributions to the Natural History of the United States of America--to find out more about the event. 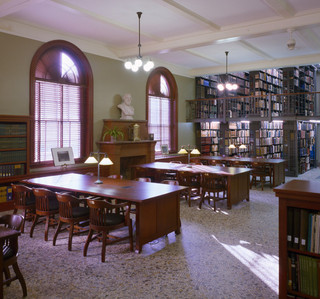 Indiana University-Bloomington Professor of English Christoph Irmscher, author of two books on Longfellow (Longfellow Redux and Public Poet, Private Man), returns to MHS to deliver a talk on his most recent book, Louis Agassiz: Creator of American Science. A Longfellow contemporary, Agassiz bridged the gap between specialist and amateur in 19th century America, changing ordinary people’s relationship with science forever. But he also had a dark side—racist impulses that led Americans to look to men of science to mediate race policy. 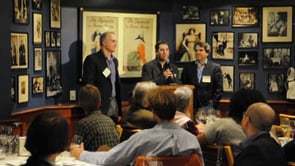 The Cambridge Roundtable on Science & Religion hosts an evening of dinner and discussion at the Harvard Faculty Club, Wednesday November 6th, 6:00 PM, featuring New York Times Bestselling Author and 2013 Massachusetts Book Award for Fiction winner Matthew Pearl, author of The Dante Club and The Technologists, and Editor’s Choice of The New York Times Book Review in February, Christoph Irmscher, University of Indiana-Bloomington, Professor of English and author of Louis Agassiz, Creator of American Science contributing to the Roundtable's series on Science and Scientism, part II. For a link of a video capturing the closing moment of the Roundtable with Pearl and myself, click on the image on the left. 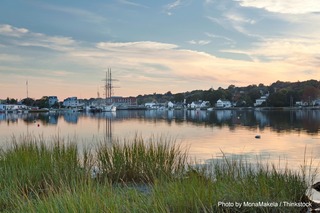 On November 5, I will be speaking about my experience of writing about Agassiz's life as part of the Lambert Environmental Lecture Series at the Goodwin-Niering Center for the Environment at Connecticut College. 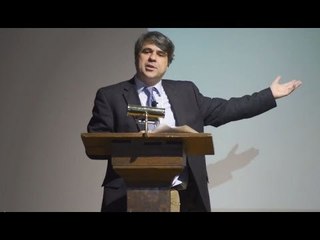 Check out the program for this year's Chicago Humanities Festival. An incredible line-up, including such luminaries as Edward Albee, Junot Diaz, Anne Carson, Lemony Snicket (aka Daniel Handler), etc. etc. And I am part of it all! Click on the link on the left.

Lecture and Mini-Seminar at Syracuse University, September 5 and 6

On September 4 and 5 I will be visiting Syracuse University, NY as part of their "Critical Connections" series, hosted by Special Collections. I will be giving a public lecture and mini-seminar on the topic of scientific biography. For a live recording of the lecture, click on the image.

In June 2013, I sat down with radio host Doug Storm of WFHB and religious studies professor Lisa Sideris to discuss the lyrical and ethical heart of Rachel Carson's Silent Spring . We also talked about the ecological and moral effects of the continued daily use of chemical pesticides. For a recording of our conversation click on Carson's portrait on the left. 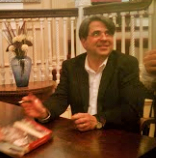 On February 5, the official publication date of Louis Agassiz, I will be speaking about my new book in the First Parish Church in Cambridge, MA, the same church where Emerson once delivered his "American Scholar." The event begins at 7 p.m. It is followed by a book-signing courtesy of the Harvard Book Store.